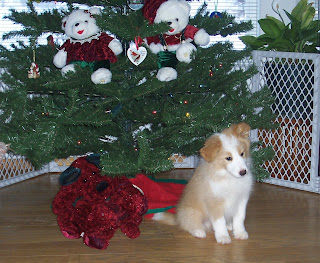 Dixie sent me this picture of Chi, formally Pumpkin, one of my gold boys out of my last BC litter, and I had to share. This was his first Christmas! And thanks go to Dixie for growing him up for a while for me. It helps so much to get the siblings separated while they are young for a couple of weeks! More on Chi in the months to come I am sure!
Posted by Emily at 8:18 AM 1 comment: 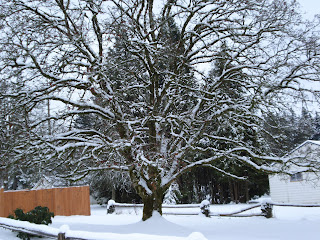 I just wanted to wish everyone a Merry Christmas and a Happy New Year from all at Pawcific! 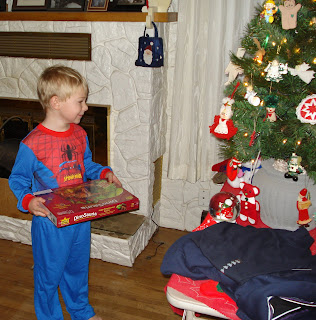 We had a kind of odd Christmas since the weather prevented us from going to my Aunt and Uncle's for Christmas dinner. So, we enjoyed breakfast and dinner at my parents house. It was definitely a white Christmas with snow coming down almost the whole day!! 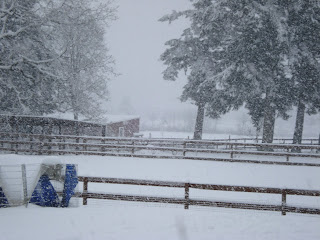 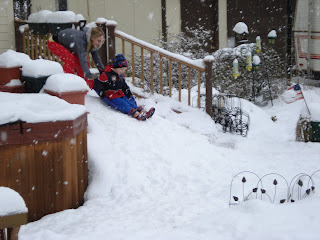 Since I am stuck in my house right now with snow still falling outside (I mean literally stuck, yes can't get out of my driveway, although could probably hike up to my parents house around the corner!)...I thought I would take some time to write a post about some of my special dogs. These are what I call my heart dogs.
Many people always ask me how I could ever part with puppies or give back dogs that I show for other people or let older dogs leave that I have grown up. It never is easy, although sometimes you are rejoiced to get a difficult dog to live with out of the house or rejoicing when that final puppy leaves from a difficult litter...but their are always those few dogs that stay forever. Those dogs are the ones that touch your heart or become a part of you.
These are my heart dogs. (in no particular order) 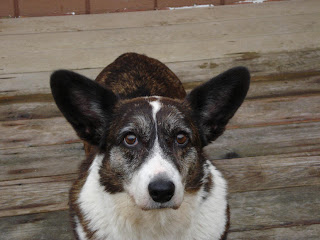 Ash, Aust/Am CH Ruatha Aisling CD RN, born in Australia, brindle Cardi, 12 yrs young, when we moved to Australia, I had to part with my very special Sheltie, Sky. Unfortunately his temperament was not sound enough to make the trip across the world, so we made the hard choice of placing him in a home before we left. My parents promised me to look for my own dog once we arrived in Australia. One of the first Cardigan people we met was Dorothy Hartcher of Llandwyn Cardigans. She only lived a couple towns away from us in the same area where we lived. Dorothy suggested we look at Ash, as Lisa had grown up the two sisters, but really didn't need both of them. So, Ash came home with us. Through out the years she has won many accomplishments, had several litters, and is now in full retirement laying around the house and being a grand old lady. 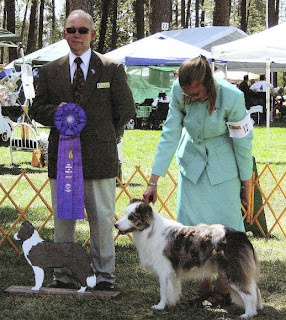 Sparky, Red Ryder at Real Pearl, red merle BC, 2 yrs old, imported from Hungary, yes Sparky is one heart dog of mine. When I first really became involved with the BC breed, I dreamed of having a red merle someday. A couple of years ago, I started my quest to find one. It took me a long time, at some point I almost gave up, thinking that I would just have to breed one, until I found Judit in Hungary, who just happened to have the pick red merle male available from her current litter and would love to send him to me here in the USA. So, Sparky came off the plane and to this day I love having my red merle. He always makes us laugh and is definitely the comedic relief of the household! 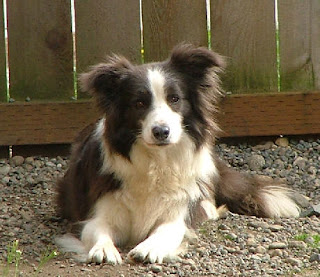 Haze, Ch Wildblue Silver Haze, blue BC, almost 7 yrs old, Haze was welcomed in to my household only a few years back. She needed lots of TLC and at first would only go up to my son. With some guidance, she quickly became the helper, healer, and stabilizer of the household. She welcomes everyone in, keeps those puppies in line, and is totally spoiled by my son, Evan, who has decided that Haze gets to sleep in his room now! 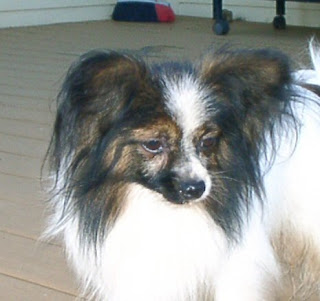 Conner, Can Ch Arbeitsheim Dear Connection, sable Papillon, 9 yrs young, Conner is my shadow. He came to me with some health issues, mainly mental, and said that I was the one to help him get through it all. After many years of recovering, he is totally healed and you would never recognize him as he is a totally different dog. Conner is very special to me and even though he doesn't go much of anywhere, (he still has huge crate anxieties) those who come and visit enjoy seeing Conner.

Those are my heart dogs. Many others hold a special place in my heart, but these are the ones who will stay here forever. ~Emily
Posted by Emily at 11:33 AM 1 comment:

We are back home safely from Eukanuba...what a trip back home!! I have had about as much snow/ice/winter weather for me for several years! Ruby won Best Bred By as you all probably already know. It was great to have Denise along with us carrying our gear, beer, and deer!! :-)
So, I went out today after being in bed for most of yesterday trying to recover from a long and exhuasting trip and took some snow pictures...here you go! 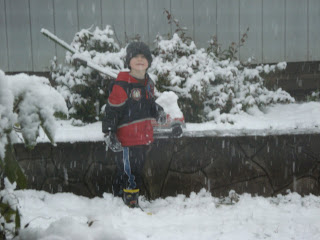 Evan in the snow. 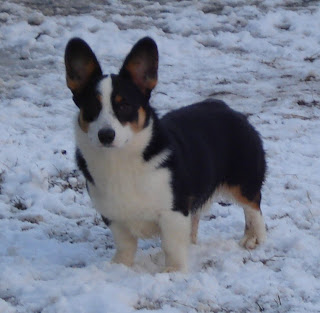 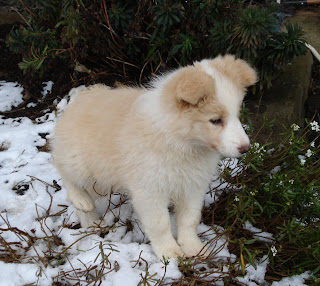 One of my BC puppies, Cinnamon. 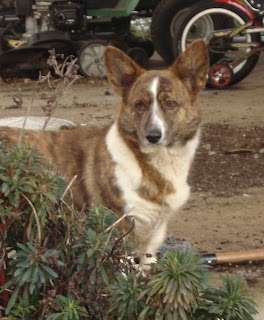 And Secret...who decided this was a better watching point!

This year my family all decided to drive down together to Eukanuba and go for the preshows as well! We have made it through several obstacles but everything seems to be going smoothly. Yesterday we had the pleasure of going to Disneyland! Evan thoroughly enjoyed the rides, although I think the Pooh ride ended up being his favorite. Mine was by far the Haunted Mansion that they redid for Christmas! Today Denise won BOB with Ruby!! Tomorrow is our last preshow before the big show starts. Herding is on Sunday. We have two BC's entered and Denise has Ruby entered. Keeping all fingers crossed that I will have good news!!!
Posted by Emily at 8:48 PM 4 comments:

Hip hip hooray!! Sparky is OFA Excellent hips and normal elbows!!!!! (otherwise known is Red Ryder at Real Pearl, he is my red merle BC for those who don't know my special Sparky!)
Posted by Emily at 10:20 PM 2 comments: 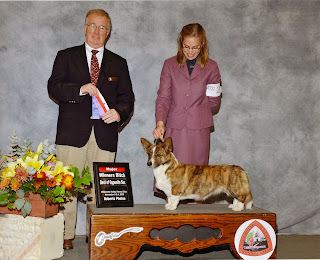 I am pleased to announce that Secret finished today at GCCKC in Ridgefield, WA with her fourth major win!!! She is now known as CH Pawcific Secret Wish out of the Owain/Brea litter. Thank you to my good friend Denise for stepping in and taking the lead for me today. (I was stuck in Mals!!)
Also...another New Champion in Border Collies...CH Wedgewood Sweet Sinsation, "Gracie" gained her last points to finish today. She is a very special client of mine as she is my Haze's granddaughter. This makes our 11th Border Collie champion for 2008! An amazing accomplishment for any handler in any breed. Thanks to Jenny, who stepped in as handler today because, well I was also in the Mal ring while BC's were going on!! 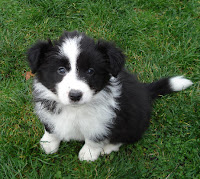 Puppy breath...yes this is my Latte...real name Pawcific Morning Latte. She is the only girl from my last litter of Border Collies out of Brayden and Roo. I am also growing up two of her brothers, Pumpkin and Cinnamon. And those who seem to love litter themes, this theme was named after my sister Jenny's favorite drink, Pumpkin Spice Latte with Cinnamon Sprinkles, as the puppies were born on her birthday! (and the puppies choose to come out in the perfect order, Pumpkin, Spice, and Cinnamon are another color...guess which color?)
Posted by Emily at 7:37 PM 3 comments:

After a long spell of watching everyone else's blog...I thought why not just start one myself...it seems I always have SOMETHING to say and never say it on my website, since it seems more "professional" to not post daily activities of interest. OK...so I guess I am done with my first post to my blog. Wow, weird! ~ Emily
Posted by Emily at 6:33 PM 5 comments: