After having a pretty long span of not going to any dog shows...we all packed up the trailer and went to the Olympic KC shows. It was great to have the trailer out again and everything went fairly smoothly (minus some minor electrical problems, but we made do). The dogs were excited to be back at the dog show again and we had some nice wins. Although I brought my camera and had every intention of getting updated photos of some of the youngsters (now more like teenagers/adults)...it just didn't happen. But, I can at least give you a winning photo... 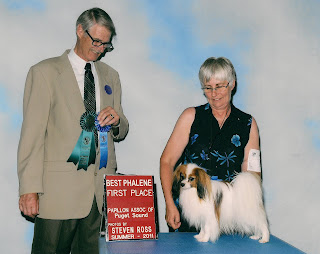 Walker aka La Ren Moon Walker won Best Phalene at the PAPS specialty show on Friday. Since Walker is such a Mom's boy, my Mom has been working with him and showed him to the win. She did a beautiful job and beat some other nice phalenes. I do have to mention that this is his second year in a row of winning this award at the PAPS specialty. He is one gorgeous boy!

Other show news...Jenny showed Dasher (BC) in Rally and won 2 qualifying legs, she also showed Lucy (BC) to Select Bitch and BOB. Mom took Rocket (Papillon) in Rally at the specialty and won his class, then did Beginner Novice on Saturday and won 2nd place with a score of 198! Jeanette went with us and showed Landen (BC) to his first 2 qualifying legs in Rally and WD, BOW on Sunday, Taz (schipperke) had some great runs in agility, and the BC puppies had fun in the match on Friday! Oh yeah, and I managed to show Fraser (Cardi) to 2nd in group at the match, then he placed in Bred by, Edward (BC) was BOS, WD for 2 pts on Sat, and Splash was Select Dog and BOS.

Overall it was a fun show!!

I am finally getting a chance to post 8 week old pictures of the Miley/Beatle puppies. My life has been a little hectic with the Border Collie Nationals being a month away!!
Here are the puppies... 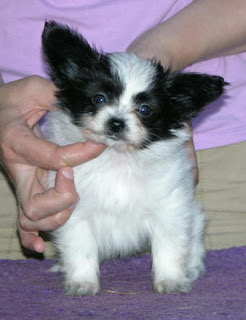 Flick - aka an absolutely perfect pocket pet! He is small and mighty. He is very outgoing and is looking for a pet home. This puppy will probably be around 8 inches and only a few pounds as an adult. Right now he weighs only 1 1/2 lbs! He has been the first puppy to discover things and really is smart! 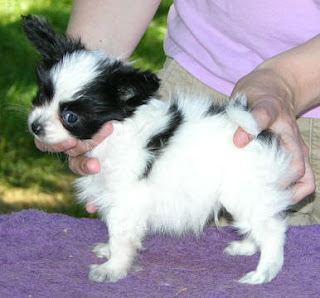 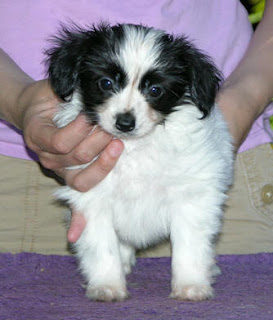 Hopper - is a promising puppy. We are waiting on some decisions before deciding where he will go specifically but he is already spoken for. 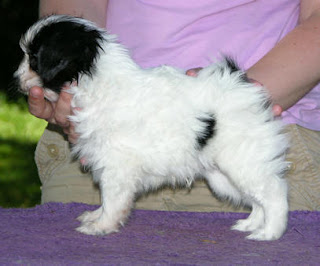 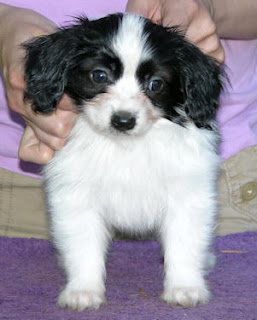 Skeeter - aka possible phalene????? or maybe just a really big eared papillon?? Time will tell! He is also very promising and if his ears don't lift to be a papillon, he may just be staying. Otherwise, he has a show home lined up. 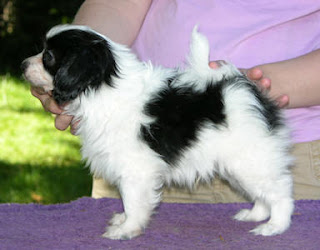 I am very pleased with the litter overall. Just was hoping for a girl instead of 3 boys!!! Oh well...praying that Miley's final litter will have a girl that we can keep.