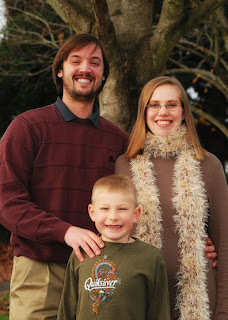 I thought it was time for another post. This one is mainly a post about all the wonderful things that happened in 2010 and what we at Pawcific South are getting ready for in 2011! Yes, lots of things happening and changing as usual... 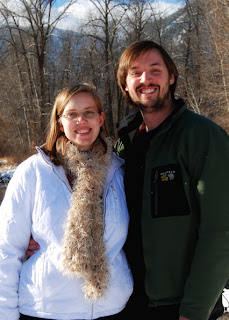 As many of you know this past year I went through a great change in my career. At the beginning of 2010, I retired from being a professional dog handler. I still miss some of my amazing cliental and wish them all lots of winning in the future!! In March, I started the process of becoming an AKC judge. It is quite a process as many who have done it will attest, but in August I was granted provisional status for Cardigans, Border Collies, and Junior Showmanship.
In the judging realm, a highlight of 2010 was judging the WA state 4-H fair in Sept. Two weeks of judging many kids in both showmanship and obedience was rewarding and tiring at the same time. I was really pleased with my picks though and enjoyed it thoroughly.
During that time of paperwork, I finished my Massage school, and now am lucky to have started a new career as a Massage Therapist for People and Pets. If you haven't checked out my new portion of my website, you should at www.massage.pawcific.com
Amongst all the chaos of changing careers, etc. I managed to still do my conformation handling classes. My students are the best! I also became a part time teacher at Musical Beginnings in Vancouver, WA for piano and voice. I love getting back into music and doing more with that side of my life!
So, now I juggle 3 different jobs, a son, all my dog stuff, and yes, as many of you know I am also pregnant, but that really goes into the future side of things! Oh, and did I mention my amazing other half, Michael, who somehow puts up with my craziness, even if we live 2.5 hours away! 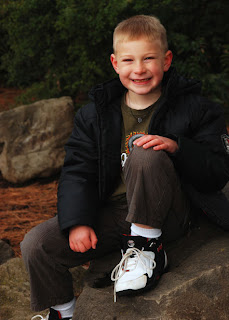 Evan turned 6 years old this year. He has sure grown into a little man instead of that little baby boy I held not so long ago. He still attends The Gardner School and loves it. It is such a special school that I am really going to miss when we move. His classroom this year is Loowit, which is 1st and 2nd graders. He also over the summer started in swimming lessons. At first he was a little unsure but with some good teachers, he now begs me to be in swim lessons! This fall, he has also had the chance to be in the community basketball program, which he loved.
Without my family being so close though, it would be hard to raise Evan on my own. They are just great about helping me out with my work schedule, letting him stay behind when I am off to a dog show, that he now thinks are boring, or just watching him for an afternoon or evening while Michael and I do something on our own. 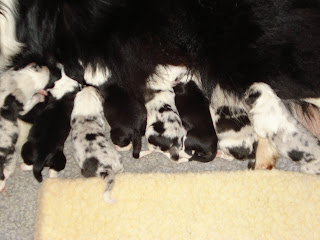 Let's start out with the new puppies. I had two litters of BC puppies at my house at the beginning of the year. The Spark-ly puppies that are sure growing up to be beautiful and high drive BC's! And the Alice x Splash puppies who found really wonderful homes, including Alice who is now off doing agility and having fun! 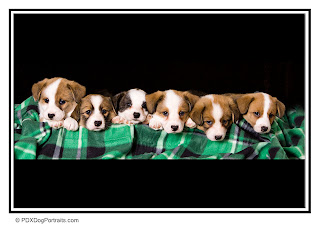 During the spring/summer, I then finally had a Cardigan litter, after many false attempts over the past couple of years. The almost all sable litter was born from Lincoln and Nola, the Outlander series themed puppies. I still have two puppies that are coming together really nicely right now and will start their careers in 2011. 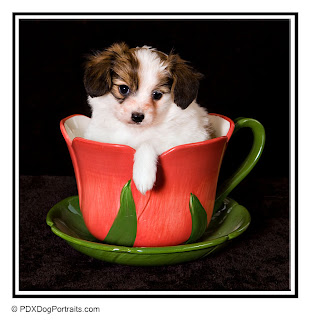 I also managed to share (well co-own) two Papillon litters. Many of you don't think of me as a Papillon person but over the years it seems to bleed in my life as well as what my Mom started with Joyvnture. I love the little dogs. The first one was Elma, born at the Elma, WA show in May. She became La Ren Joyvnture A Day In May and is co-owned with Janis McLaren, my Mom, Kathy, and myself. She is a pretty mover and I hope will grow into the promise we see right now. The other litter was our Cowboy themed litter from Radar and Heather. Unfortunately, this litter was our heartbreaking litter that we as breeders hate to have, but we all got through it despite loosing puppies. The three that remain are all beautiful puppies for their own purpose. You will see one, Sparky, Joyvnture Sparks-R-Flyin in the show ring with Le'o and her girls at Toreth. He is such a cutie!

Then the dog shows... 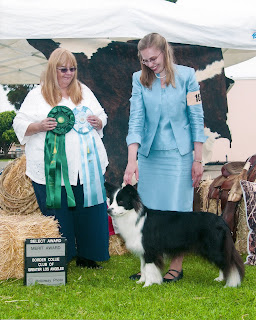 In 2010, my main focus was on one dog, Gr CH Pawcific Strike A Pose, "Vogue", who I co-own with Jeanette Jolly. Vogue did us proud by not only starting her specials career off with multiple BOB wins, but also coming away with several group placings, Select Bitch and AOM at the BCCGLA specialty, and finally Select Bitch at the BCSA National specialty show. In amongst the few shows we attended, she managed to pick up her Grand Championship as well as be amongst the top BC's in the nation. Did I mention she is only just begun her career? Yes, more big things ahead for this girl I am sure. 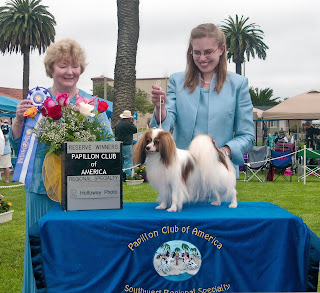 I also should probably mention my phalene, (that's the drop eared Papillon for those who don't know), La Ren Moon Walker. Due to the hardness of showing this dog (seriously he is one of the most challenging dogs I have ever shown, anyone want to try? Let me know privately), he wasn't entered a whole lot but am proud to say that he has done us all proud by the few wins he has managed to achieve. This past summer, he came away with two BOB wins, RWD at the LA specialty, and Best Phalene at the PAPS specialty. Plus, many Reserves to big majors. 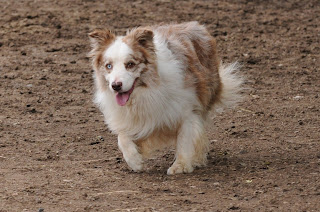 In AZ, Sparky has made some head's turn by starting his herding career off with several beautiful runs in herding. He has his PT, as well as 2 legs in both started ducks and sheep, plus two ASCA titles. 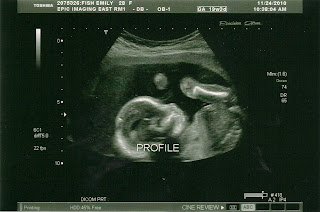 Did I mention I was pregnant with my second child? Yes, due in April, so another little boy will make his presence known. Michael and I are excited although busy trying to figure out all the logistics for the future. Evan is really excited to have a new baby brother coming!
One of my main goals for 2011 is to start really working on my Massage practice. I enjoy the work I do for the animals and humans so much. Never thought that I would be blessed with the talents I have, but now want to share them with as many clients as I can! Once my life settles down a little more, I am hoping to take some more continued ed classes to solidify the new techniques I have learned. And also get some more practice at the amazing Body Talk system that really works!
In dogs...with all that is happening in my life, I had to really cut back on my breeding program and make some hard decisions to place some amazing dogs. It makes me really sad to see them go, but then again I have to do what's best for the future. Some of my co-owned dogs are going back with their co-owners while I am busy with a newborn. I have another couple who are off being trained or leased. So, it makes it a little less insane with a few less dogs at my house currently.
Puppies in 2011? Yes and no...we are keeping our fingers crossed for a BC litter early in the new year, although it is not happening at my house, but I still get to visit. A Cardigan litter is planned for the spring, but again is being leased by someone else, so I will have to play with the puppies from afar. I am hopeful later in the year I might feel up for a litter of my own and have several possibilities going through my head, but plans may be pushed back to 2012.
Lastly, the big volunteer position I have been working on is seeing the end of a long journey. Yes, in Sept. 2011 the BCSA national will be in Albany, OR!! Being the co-chair of this huge event has been challenging but fun. I just can't wait to show the rest of the world how the Northwest can put on a party!