I just got home from a fun day at the Silver Falls KC fun match. Since one judge was doing boys and the other girls...I made the decision to only bring my boy puppies today. I couldn't believe how big of a match it was, lots of puppies and lots of people I knew were present. First off Diesel went in his 15-18 mth class. He did much better moving wise but was being a pill about holding his stack for more then a couple of seconds...but did come away with 1st place in his class. Lincoln went in next...he hasn't been to anything since December...so this was sort of a warm up to LCKC in a couple of weeks. He had a big class made up of mostly big dogs. This boy just flies around the ring and even though he was melting on the table came away also winning 1st place in his class! Third up was the baby, Chai. He turned a lot of heads...got a lot of "what breed is that?" Although the judge didn't like that he is in the middle of loosing his baby teeth, he strutted his stuff and did his best. So, in Best Puppy in Match we went in with Diesel and Lincoln. My good friend Leann took Diesel back in, thank you!! The judge pulled out 4 puppies, a golden puppy, Lincoln, a mal puppy, and a pem shown by Barbara Jett. The mal puppy ended up winning but Lincoln some how came out with Best Opp. in Match!! I am proud of my boy!
Posted by Emily at 6:55 PM No comments: 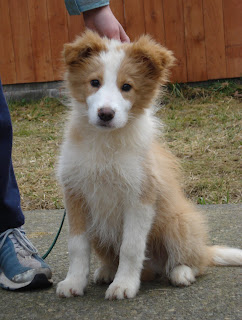 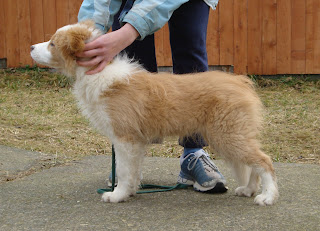 Pawcific Pumpkin Spice Latte, "Chai" at 4 months old. He is my keeper from my last BC litter from CH Winpara Dragonfire and CH Pawcific Hundred Aker Wood. Don't you just love those dark ee reds!!
Posted by Emily at 3:45 PM 5 comments: 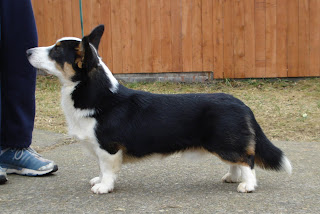 Here is an updated picture of Lincoln at 10 months old. He sure is turning into one handsome boy. It will be several more months before I start showing him in full swing...but he is entered at LCKC in February. Then maybe nationals, we will see! For those of you who don't know Lincoln's sire is Aust Ch Wynrik Drum Major, "Joe-B" who is a grandson of the famous Aus Grand Ch Llandwyn Aces High "Buzz". His mother is Ch Pawcific Merry Miss Carey. Lincoln was a singleton via frozen semen from Australia.
Posted by Emily at 3:38 PM No comments:

I took some quick pictures from my bedroom window. The Cardigans were just sitting and laying around, so thought I *might* be able to get an updated shot of Della (since everyone keeps bugging me for one!). Anyways....here is what I got! 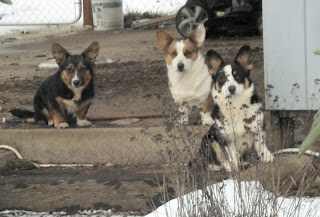 A group shot...Left to Right: Della, just 6 mths, Clu, hoping with all fingers crossed she is pregnant this time, and Lincoln, 10 mths old 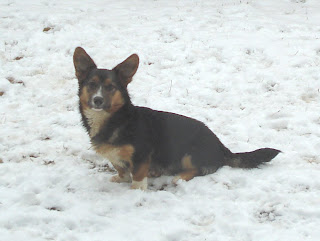 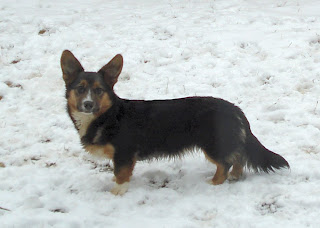 Della in a sort of stand 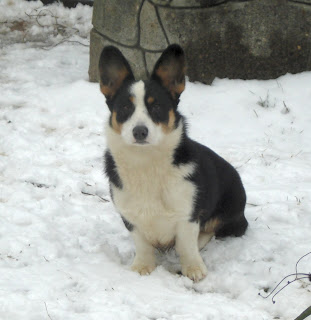 And of course Lincoln!
Posted by Emily at 1:50 PM 2 comments:

You have got to be kidding...another snow day???? Evan's school was cancelled. And I just got back from driving to Wilsonville Vet...took me an hour and 45 minutes to get there!!! Now I have to go back this afternoon, hopefully things will have melted by then. For those who don't live in the PNW, people don't know 1. how to drive out here 2. the transportation people don't know how to get the roads safe!
Posted by Emily at 12:17 PM No comments: 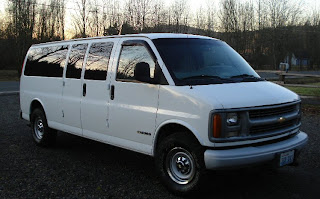 I know this is not really on topic...but...my van is for sale. If anyone knows of any dog show person looking for a big van, it is a great one! 2000 Chevy Express 3500 series diesel. It is in great shape, although high miles, but thought that if anyone knew of someone looking, email me and I can forward on the full details!
Posted by Emily at 12:57 PM No comments:

Yes, it is Saturday after Rose City, but it takes me this long to get caught up on things after going strong for 5 days of shows (we had to be their for the Terrier specialty on Thur), after only being home a few days from the 3 day Puyallup cluster! That aside...I did want to congratulate everyone on their wins from both clusters. Although we had up and down results from the Pawcific crew...I am proud to announce that Jenny made it in the group ring on Saturday with BISS Ch Pawcific Dream Date, "Lucy" our Border Collie! So, watch for her on TV this year!
Posted by Emily at 4:43 PM No comments: 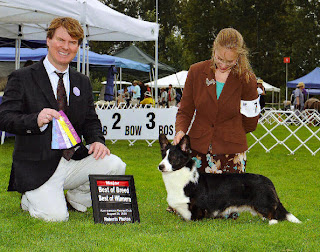 Diesel came back OFA prelim GOOD!! He will be back in the ring soon, so watch out!!

Other news...I am so pleased with Secret, she not only won BOB two out of the three days in Puyallup, but also made the cut in both Herding Groups. These are some of our most prestigious shows with very competitive groups. She definitely makes me proud to be her breeder!
Posted by Emily at 1:51 PM 6 comments: